Heart Mountain Camp – To the End 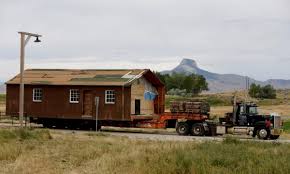 The story of the Heart Mountain Relocation Center’s second and largely unknown life, as seen through my now nine-year-old eyes, concludes.

Perhaps it was the shared experience of living through the blizzard of ’49 together that turned the camp from … well a camp, as in a temporary way-station … into a community.    As kids, we watched with a distinct lack of interest as the adults worked to turn their units into homes and develop a sense of community spirit with sports and activities.  The men played baseball.  As I recall, the teams came from the different sections of the camp.

Each of these had a name.  We lived on Goat Hill—the area including the monument, the admin building and at least eight other barracks.  Probably more.  Across the road and to the east of the little white house that still survives and around the hospital and laundry buildings was Snob Knob.  Its name derived from the fact that the senior Relocation Authority officers had lived there.  Another cluster of barracks on the north side of the current road (after it bends) formed at least one other neighborhood.

Beautification became a big deal.  The women planted flowers and watered them from the kitchen sink.  Mom had found a sapling which she’d stuck in the ground that first summer.  Now, she added hollyhocks and iris bulbs, the latter sent by her father, who bred iris as a hobby.

“They should grow almost anywhere,” she said, probably made mildly optimistic by the very green spring of 1949.  The front of our barracks now sprouted little fences to keep kids and dogs off.

But it was the community gardens “below the hill” that occupied almost everyone.  Situated in a field just to the east of Road 19, someone (probably during the Japanese period of occupation) had divided the land into plots, the interested residents drawing for location.  We now learned about irrigation and head-gates and how to make little dams out of pieces of canvas and scraps of lumber.

This was fun.  We’d ditched our shoes with the first nice weather and wallowed in the feel of mud between our toes.  But by July, the gardens had become pretty much an adults-only affair.  Weeding was distinctly not a kid thing.

We’re in the West, Now

The fourth of July saw us learning about cowboys and rodeos.  At last we would get to see real live cowboys and maybe, even, some Indians.  Mom worked her sewing machine overtime, cutting parachute silk from the Army Surplus store—iridescent orange—into Western shirts.  It seemed like everyone in the camp went to the rodeo and the parades, driving in convoys and picnicking in Cody’s city park where we made jokes about coming east (from Oregon) to get to the west.

The Bureau of Reclamation annual picnic was another occasion for a general exodus.  This time to Horse Creek Campground on the North Fork where the men did the cooking and organized games for both adults and kids, while the moms set out plates, utensils, and food on long tables.  Watermelon eating contests—who could eat a slice of watermelon the fastest—was a real favorite with the river being handy for cleaning up the resulting mess.

All the time, during these years, people were dribbling out of the camp and into either Cody or Powell, while the camp, itself, gradually disappeared.  By the end of the summer of 49, we’d lost the high school and the common buildings central to the area once occupied by the Japanese while the camp’s boundaries seemed to be shrinking.  Where once we would put our peanut butter and jelly sandwiches in a sack and hike out to the northern perimeter on our way to climb the bench, tiring before we reached the last building, now we’d find ourselves passing the last of the barracks almost immediately … or so it seems from this far future time.

The summer of 1950 proved even slimmer, the camp now reducing further, and I believe to the degree that the community garden project ended.

People vanished along with buildings.  Our friends who lived on the north side of the camp went first.  They were followed by those of us in Goat Hill and Snob Knob.  Some would be disappearing pretty much forever from my life as they moved into Powell.  Others simply transitioned.  Two of my best friends were among the former, being lost to me by the Cody-Powell divide that was, if anything, more complete then than now.

Most, however, moved into Cody, but the closeness we enjoyed in the camp dissipated in the larger environment.  A few things did stay the same.  Our Girl Scout leader, for example, would go on to become our Scout leader when we moved to Cody.  The annual Bureau picnics became reunions where old bonds would be restored for a few hours.

Finally, one day Daddy detoured on a trip to Powell to show us where we had lived.  He parked on the road by what was left—the concrete slab that had been a tennis court and Mom’s skinny tree that marked the boundary between our unit and the middle unit.  Beyond, the memorial to the Japanese soldiers who’d fought in WWII had deteriorated further due to the weather, while the rock wall forming the base had mostly collapsed.

The area had yet to be farmed, so the ground still showed where roads had run and buildings once stood.  But, soon, even those would be gone as would people’s recollections of what had happened here.  Only the high chimney of the old laundry, a few buildings, and the monument remained as reminders.  Finally, in the 1990’s a group of local citizens had the vision and the determination to fund and create a museum designed to educate future generations and, hopefully, ensure that a similar miscarriage of justice does not occur again.

As for our post-war years at the camp?  It’s a tiny footnote but a positive one.  At least the US Government’s financial investment in the camp paid off in an unexpected way by providing necessary housing for both the staff, who worked to complete the Shoshone Project, and the homesteaders who turned the desert into farmland. 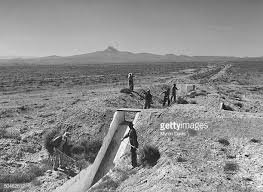 Ditches to carry water to the new homesteads

Back to the top

More on the early days, the winter, the blizzard of ’49.