Heart Mountain Camp – The Blizzard of 1949 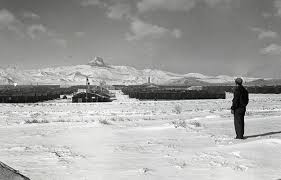 The story of the Heart Mountain Relocation Center’s second and largely unknown life, as seen through my now nine-year-old eyes, continues.

January 3, 1949 was around seventy years ago.  I had just turned nine and, while events of the next three days merge in my memory, the first minute or two after waking up that Monday morning could have happened yesterday.  Cold.  Noise.  Cold.  The storm should have stopped.  It should have gone away but, if anything, it was worse than the night before.

The Blizzard of ’49, the worst in Wyoming’s recorded history, caught everyone flat-footed.  Nor were we to learn what we were facing, our radio delivering a sea of static.  Maddeningly, sometimes Daddy would find a frequency with a voice, only to have it submerge below a crackle of sound.

“If you don’t like the weather, stick around ten minutes.”  He’d heard Wyoming old-timers saying that and believed it to be true.

Mom liked to add, “There’s never a day that the sun doesn’t shine in Wyoming.”   They were about to learn the truth of another of Mom’s aphorisms, “It’s the exception that proves the rule.”

This storm would prove to be like the Energizer Bunny and just keep going and going, banging not on a drum but slamming against our outside walls, leaving Wyoming’s shining sun masked by layers of clouds and snow.

A few weeks earlier, we’d happily discovered that our milk, delivered in the wee hours of the morning, would freeze and expand in the bottles, popping the lids, the cream rising into the frigid air like the necks of some strange water birds.  Mom sliced these, put them on our oatmeal, and sprinkled them with sugar.  Delicious.

Sometime later in the day, the men from the other two units in our barracks blew in through our back door with, “Can’t see a thing out there,” and, “Hard to stay on your feet.”  They’d made their way along the wall in white-out conditions, probably feeling the need to consult and share their worries.

Only as they talked, cups of coffee in hand, and I eavesdropped from behind the covers of a book, did I learn that that our stoves were burning coal at an alarming rate.  To replenish them, the men would have to cross the open area in front of the monument—it’s the parking zone now—to the coal bunker on the far side.

They talked of stringing rope so they’d find their way back.  They spoke of men dying within feet of their own doors because they thought they were lost.  And what about the clotheslines?  Wouldn’t there be enough rope in those to reach across to the coal bunker?

Power?  The sub-station was almost as close as the coal bunker.  The three of them were engineers and figured we’d be okay unless … .

What about food?  Most everyone had been in town on Saturday.  Food storage space was limited in the units, so no one had reserves, but … .  Water?  They could melt snow.

Blizzards, I learned that day, can dump enough snow to cover an entire building.  But for us, unless the wind shifted, it seemed that the wind would keep the west wall scoured clean.  We’d be able to get out.  The men thought aloud.  But, then, what?

Blankets were tied down over the engines of our cars, but “a fat lot of good that’ll do,” they said (or something like it) and laughed.  It wouldn’t happen.  Daddy vowed again to get rid of our old Plymouth.  But for the moment being without transport didn’t matter.  The road into the camp always drifted badly, they said.  It’d be impassible.  We were on our own.

It wasn’t so much their words as their tones that caused a shiver like a dream of falling to join the chill that never quite left me during those days.  Something dangerous was happening.  Something worse might come.  What if Daddy went for coal and never came back?  What if … ?

Through this, I had been sharing a blanket with Dee, my almost four-year-old sister, she at one end of the couch, me at the other.  She had her dolls; I had my books.  My baby brother was bundled in his snow suit in his playpen.  These would be our default positions for the duration.

It seemed a never-ending night for those three days, the overhead lights and our one reading lamp on, the curtains closed, blankets shrouding the front door and the short hallway to hold as much of what heat the oven and stove provided in as small an area as possible.

Fast forward with my memories of the men coming and going, of snow drifted against the front door despite what the men had said, of a pan of water kept simmering on top of the coal stove,  through to the clouds dispersing, the sun appearing, Heart Mountain revealed as a winter goddess—all brilliant white and pristine, her head looking north—against a sky of deepest blue.

“We’re the banana belt of Wyoming,” Daddy said with no intention of irony.  Afterwards, I would learn that as bad as the blizzard had been for us, it’d been much, much worse elsewhere in the state.  But, then, squinting against the glare, we pulled on our outdoor clothes and went outside to play and to find the most unusual thing.

“We can build an igloo,” someone suggested.

More storms, normal storms but lots of them, blew through.  We went to school.  We had snow days.  Then came an evening when it seemed like the population of the entire camp gathered behind the Admin Building on the edge of the bench.

Fires burned, sending sparks high toward a sky crammed with so many stars that their glow reflected off snow crystals and we needed no other light to see.  Hot dogs and marshmallows roasted on sticks, and we screamed as we sailed down the bluff to end on the lip of the canal that lies at its foot.  Pieces of cardboard, real sleds, old boxes, anything that could slide had been pressed into service.  No doubt flasks were passed between adults.  People would begin songs like:  Fre.re Jac.que, fre.re Jac.que, dormez-vous, dormez-vous… Or, She’ll be comin’ round the mountain when she comes … .  Others would join in and, again, we were in kid paradise.

The blizzard of 1949 covered a four-state area and, when the storms had ended, seventy-six people had perished and many more suffered frostbite, snow blindness, and loss of limbs.  I should also mention that as rough as the storm was on those of us in the camp, it was inestimably worse for our farmers and ranchers and, in particular, those homesteaders who had moved their open-ended barracks in segments to their homestead allotments that fall and who were, essentially, camping out inside a shelter only marginally better than a tent.  That they stayed through that winter to prove their land in coming seasons is a testament to their strength of character and heart.

Back to the top

More on the early days, the winter, the community