WHAT’S IN A NAME:  Esports 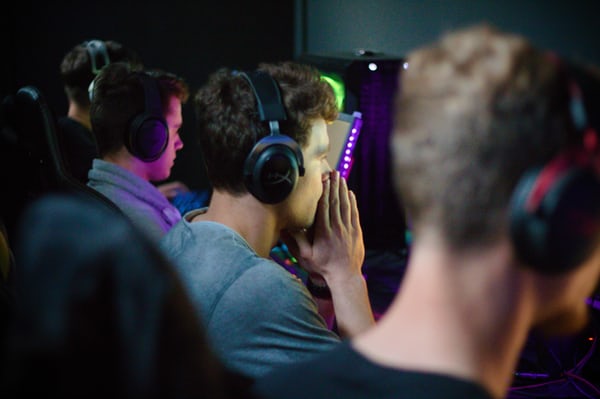 We all recently learned

that Northwest College’s plans to support the gaming industry by offering a new activity to its students:  namely, video game competitions rebranded as esports.  This news gave me pause.  Right up front, I’ll admit to having a negative view of the gaming industry, its calling video gaming a sport, and the idea of it as a college-sponsored activity.

Call me old-fashioned, but I think names are important.  I have no doubt but that how we name things influences not just how we speak but how we behave.  Take the word “esport” as an example.  The base word “sport” shouts healthy and good.  We want our kids to engage in sports, because sports involve skills and physical exertion—so says the dictionary.  We want our offspring to develop healthy bodies.  Except they’re not likely to do that while sitting in front of a video gaming monitor.

That said, they do learn a skill and hand and finger dexterity.

Which reminds me of a childhood joke.  My friends and I would face each other and straighten and bend one finger while chanting, “Exercises, exercises, we must do our exercises.”  Then, we’d explode in laughter.  Totally ludicrous.  Right?

The few people laughing in the video gaming world are at the top of the competitive heap or own the game companies.  Those guys—and they are guys–laugh all the way to the bank.  They can stand up straight with pride.  That one simple word change from video gaming to esport was a stroke of genius, dignifying the activity and opening the door for expansion into the schools.  The result?

The industry has gone one step further by calling its players “athletes.”

Aargh!  That has to be one of the biggest word rapes in modern history.

Which can’t be all bad for our kids and future generations, can it?

Pause.  Actually, a really big pause here while I took a break and did my research, coming up with two laundry lists—a good one and a bad one.   The “good” things about gaming turned out to be good for those who design, manufacture, and sell games and those who manage the competitive end of the industry while the “bad” things all happen to our kids and by extension to their parents.

Reasons Not to Sponsor College-Level Gaming

A word to balance the above.  Not all games are violent.  Not all of the above applies to every gamer.   Of course, some games can be fun and have positive elements, particularly when played in moderation and as entertainment.

What I’m saying is that we shouldn’t let ourselves be conned into believing that just because something comes with a good name that it is a good thing.  Video gaming has a place, certainly, but that place isn’t in a college sports program.  Back to the top