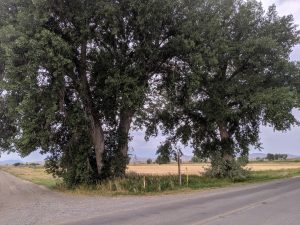 Or maybe you don’t.  Where you turn if you’re taking visitors to the Japanese Relocation Center Museum.  Those two big cottonwoods?

For many years now, they’ve been a notable local landmark.  In fact, long before the old internment center achieved recognition as a national “Landmark Site,” those two trees were well known.

“It’s easy to find,” people said and many still do say of Road 19 and the lanes that branch off it.   “Turn when you see the two trees and the chimney on the hill.”

Once, if you were coming from Cody, the two trees stood tall and strong—a gateway of sorts—between long stretches of treeless cropland, only recently brought under irrigation, and a tree-pocked zone of established farms and their windbreaks.

And how old are those trees, anyway?  Cottonwoods can die young … I just lost one that wasn’t more than 30 years old.  On the other hand, they can live for several hundred years.

How Old Are They?

These aren’t close to that.  To find a benchmark on their age, I dropped by the Internment Center Museum, looking for photos of the old camp gatehouse which once stood nearby.  The size of the trees in the early 1940’s, I reasoned, would give me something of an idea of age.  Did the trees date back to the turn of the century, maybe to the period when the Lanchburys had their stage station a stone’s throw away?  Who could tell.  Perhaps their seeds had hooked a ride to the site with one of Chief Washakie’s bands or Chief Plenty Coups or … .

Photos of the intersection where the trees now stand rolled out of a printer.

Who knew that the mind can interpose something as big as a couple of trees onto real memories?  Mine certainly had.  I “remember” passing their shade.  I “remember” fearing that rattlesnakes from the adjacent alfalfa field lurked in their grasses.

As a reality check, I stopped at those trees a few days ago, stepped into their shade and into a mini-ecosystem.  The humidity immediately rose, the temperature dropped, and I’d swear I felt a refreshing stirring of the otherwise still air.  Grass and weeds grow dense there, while seeds blown in or dropped by birds try to find space, soil, and water to prosper.  The two trees, which are really four—one having three trunks like an arborist’s Siamese Triplets—share their canopies and their root systems.

On this day, as in my false memory, I avoided venturing too far into the world of these landmark trees.  The field beyond the trees no doubt still is home to snakes.  I stared at that field, “remembering” my eight-year-old self along with my friends, Sandra Faas and Sharon White, crossing it, headed for a small store that once squatted close to the railroad tracks—in proximity to where the potato cellars and the “Vocation” sign are now.

We would have seen the trees near the store, of course.  What I recall now is spending our nickels on sweets, sitting on a bench outside the store facing the opposite direction, licking our ice cream bars and wishing for shade and the sight of something green.

What about other memories?  Looking from the trees toward the area where the camp buildings stood, everything else seems to closely mirror them.  Heart Mountain’s head still seems to sit on the bench; the alfalfa fields still grow crops.

But turn around, and the world is quite different.  South, east, and north, the valley is changing again.  Where the desert was once yielding to agricultural lands and windbreaks, those same lands now are growing houses, yards, and many, many trees.  The rich green of their summer foliage has become so omnipresent that it makes almost solid visual lines below the mountain scenery.

An Eden (of sorts)

The sight reminds me of an illustration in my childhood Bible—a bucolic landscape, one that purported to be a scene of Eden.  The early pioneers had a vision of turning the desert into a replica of that paradise.  The following generations did a good job of creating one.

I have to laugh because it’s better than crying over what comes next.  Just as the native populations looked at the desert with its rich biodiversity and longed to see it stay the same, I turn away from the trees toward the one housing development in my line of sight (incredibly, there is one just a mile or so south), and I wish those houses and their trees and grass yards plus the fences, the playsets, the outbuildings and parked equipment would all go away.

Not going to happen.

So, knowing that the only constant in this world is change, I look up into the intertwined branches above my head.  What I see now amid the fluttering leaves and shifting light is not so much a landmark as a harbinger of change.

In the not too distant future, it will be futile to begin a column the way I began this one.

Eventually, as well, they’ll disappear again from photographs of the intersection.  Those trees, those one-time landmarks, will simply be lost among thousands of others in our growing suburban forest.