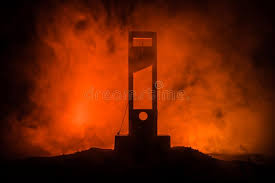 “Let them eat cake,” Marie Antoinette allegedly (and incorrectly) said just before the French revolted and lopped off her head with a then new invention—the guillotine.

Neither she nor pretty much anyone else at the time realized they were suffering what we would call a psych break.

Not just the French court but the entire ancient regime came down in the cataclysmic change of the late 1700/early 1800 revolutions from China to Bolivia.  The events of those few decades changed everything against a backdrop of technological development, social evolution, and massive population shifts.

Sound familiar?  Thus, the birth of our own democracy, one with built-in factors for obsolescence leading to our own psychic break.  Think slavery as an example.   A number of our founding fathers knew it would have to go at some point, but they compromised, and we’re having one of our psychic breaks as a result of that and subsequent compromises.

The “replace-by” dates have come and gone with race as a continuing issue plus rot in our political and economic systems.  People are suffering and not in silence.  Which may be a good thing.  We don’t have to have a revolution to effect positive change.  We do have to have the will.

The Inevitability of Change

That said, change will come.  Like it or not.  Controlled or not.

Why?  Because like the long lost royal courts of Europe, our own politicians and leaders have been hoping that by doing nothing they can accomplish something.  In the meantime, the stock market is booming, the already rich leadership has become obscenely rich, and the country is more divided than it’s been at any time since the Civil War.

Along with that we’re in the midst of an unprecedented pandemic with 340,000 deaths and counting, a social system strained past the breaking point, and jobs disappearing faster than they can be replaced.  Homeless fill the streets of towns with vacant store fronts.  Global warming is raising the oceans.  And I could go on.

The guillotine is no longer “cutting edge” technology, but the recent government response to the current situation is going to be about as effective in helping the average American as was Louis XVI’s gesture of alms to the poor (factoring in inflation).

Isabel Wilkerson writes about the causes of our current psychic break in her new bestseller, Caste.  Another book, Reimagining Change, is an optimistic look at psychic breaks as opening up space for positive change.

As in so many things, we’re lucky here in Wyoming.  That said, we have our own areas where change will happen.  For us, it’s primarily a question of adjusting to the economic break, to meeting our state and county fiscal crisis with imagination and flexibility, with adjusting our old systems to meet new realities.  If we do, we can “reimagine change” and save our small towns while keeping our taxes low.  If we don’t?

Let’s not go there.