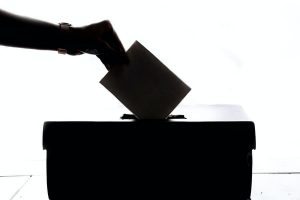 we learned that our American revolution and our experiment in democracy was founded on a then untested idea—citizen voting.

The Athenians had tried it on a small scale, my teacher said, and that had failed.  Could we do better?  Sweltering through a Philadelphia summer in their jackets, vests, and stock ties, our founding fathers struggled with the concept.  From a hot and humid May through a broiling September, our teacher told us, they wrestled with their doubts.

Thus, still not certain that they could trust the electorate—even as far as actually bothering to vote—the founding fathers built in safeguards like the Electoral College and walked around the complex and controversial issues of voting requirements and circumstances, passing the buck to the states.

I was reminded recently, thanks to a Zoom conference held with a bunch of women from around the country, that some states chose then and continue now to disenfranchise many by, among other things, making it impossible for them to vote.  Leaving us with a sort-of democracy/kind-of republic.

I listened to the women talk about a range of statutes that, taken together, are only slightly less obvious than the old apartheid-style laws in restricting the access of entire classes of people from the ballot box.

Which really brought home how hugely privileged we are in Wyoming.  Our voting laws have to be among the best in the country in terms of making it easy for almost anyone over the age of eighteen to fulfill our key responsibility as citizens.

Thus, if the virus is still with us when our primary election rolls around in August or—God forbid—come November, we won’t have to choose between risking our health and voting for the candidates of our choice.

That’s because Wyoming allows FOR ALL REGISTERED VOTERS TO VOTE either in person or remotely and makes the process as easy as it possibly can be.

In case you’ve never done remote voting and are wondering how it works (that was me until I volunteered to be an election judge), let me walk you through the process.

Before you can vote, though, you need to register.  Once you’ve done so, incidentally, you don’t need to do it again.

What does registration require?  Fill out a form in the county clerk’s office and show your Wyoming driver’s license to prove you’re a resident of the state and over 18.  (Incidentally, you can do this at the polls, as well.)

Just so you know, too, there are a few potential restrictions for, like: felonies, double-dipping, and mental incompetency.

But what if you don’t have a Wyoming driver’s license?  No problem.  There’s a bunch of other documents that’ll do as proof of identity and residency … a passport, for example.  You can find the list online or in the clerk’s office.

And, one other thing.  In order to vote in the August primaries, you must have checked a box on your voter registration form that specifies your political affiliation—Democrat, Republican, or Independent.  Don’t worry.  You’re not labeling yourself forever unless you want to.  Wyoming law allows you to change your mind and your affiliation at any time.

Okay.  You’re registered.  Now, all you need is a ballot, which comes from the county clerk’s office.  They’ll accept your request in multiple ways (email, mail, phone, online, in person) at any time after January 1 of an election year.  It will be sent to you 45 days before the election.  That’s 2 July for the primary and 18 September for the general.

Being Part of Something Big

That’s it!  Register, get a ballot, pick your candidate, then submit it either at the polls or via mail at your convenience.   You can also walk into the courthouse and vote there at any time after July 2nd for the primary and September 18th for the general (but not on election day).

Personally, I love the process of “going to the polls.”  It gives me a warm, fuzzy feeling of being part of something much bigger than myself, something that encompasses friends, neighbors, family, and this great democratic experiment of ours.

But this year?  The clerk’s officecl wants to encourage everyone to be cognizant of the Corona virus and vote remotely.

As for me?  However I decide to vote, I’ll be remembering how privileged I am to live in a state that wants everyone—you, me, everyone—to do our duty as citizens in order to keep America’s great constitutional experiment working.